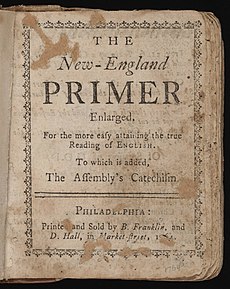 according to Wikipedia, was the first reading primer (textbook) designed for the American Colonies. It became the most successful educational textbook published in 18th century America and it became the foundation for most of the very first Schoolbook!

In the 17th (1600’s) century, the schoolbooks in use had been brought over from England. By 1690, Boston publishers were reprinting the English Protestant Tutor under the title of The New England Primer. The Primer included additional material that made it widely popular with colonial schools until it was supplanted by Noah Webster‘s Blue Back Speller after 1790.

The following, written by: Samuel James Smith, last updated: 3-28-2016, states that, The Primer was used to teach children to read using the same old methods that we use to the day. “In rhymes and/or songs”, undoubtedly influencing the likes of Founding Father Francis Hopkinson. 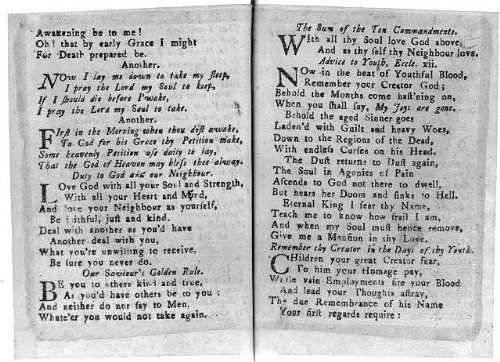 The Dictionary of American History, Copyright  2003 The Gale Group Inc., states that The New England Primer, first published about 1690, combined lessons in spelling with a short catechism and versified injunctions (songs) to piety and faith in Calvinistic fundamentals.

Crude couplets and woodcut pictures illustrated the alphabet, and the child’s prayer by Poet: Henry Johnstone that begins “Now I lay me down to sleep” first appeared in this book. The Primer fulfilled the purposes of education in New England, where Puritan colonists stressed literacy as conducive to scriptural study.

For about fifty years, this eighty-page booklet, four and a half by three inches in size, was the only elementary textbook in America, and for a century more it held a central place in primary education.

The Author of the New England Primer?  Benjamin Harris an English publisher, a figure of the Popish Plot in England who then moved to New England as an early journalist.  Born: 1673, England, United Kingdom. Died: 1716